This game is not working for me. It runs, but if I proceed to the east at the start the cinematic plays. If I go down into the catacombs the door behind me locks and I lose all my candles, so I cannot progress. And If I go into the house further to the west, as soon I exit the cinematic from the beginning plays again starting me over.

The name of the investigator was Farold Roberts and the name of the flying demon is not a demon, he is a flying monster. His name is Atzlar.

What have I done 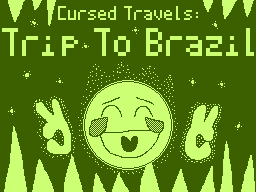 Art made by me using Aseprite

I really like the style of the Cursed Travels games! I don't know how to explain it well, but I really dig the sort of quiet vibe the games ooze. Everything feels very hush hush and the magic of the world feels very muted, if that makes sense? I think you've got a real good sense on how to push that style with minimal effort, like when the lights turn off as the travelers move past houses at the beginning. It just sets the tone so well. Can't wait to play more of these!

I think I bumped into a bug? After I placed the first candle to open the door to the catacombs, when I got downstairs I had no candles left and the door back up was locked, so I couldn't do anything..

Here are the both parts of my gameplay:

I'm binge playing all the games you've released and it's been a fun ride. This was a great one to wrap up my expedition. Really enjoyed it! Hoping for a sequel since it seems left open for one.

I loved the game! The riddles were interesting and challenging, but not that hard to solve.

hm, I got 11 souls and got the bottle after the banshee was defeated. Did I miss something or did I get everything?
Can one get the cat eating thing the other comment mentioned?

Great game!  How does one feed the cat as per the hidden journal?

fun game so far but OH MY GOD jumping around in the house without a door is killing me. currently trying to kill the soul but the platforms are so tiny and hard to jump on that I can't follow it fast enough cause I keep falling.

You and me both.

Awesome game, it was a lot of fun and the best part is that it's  going to have a second part based on the final message. 10/10

I wasn't expecting much, but man did I enjoy this game.

11 Souls:
1st Soul, MacSagart: Inside the church
Go into the church, the first building to the left from the game start, talk to the priest inside. He will give you some candles. Down and x to light a candle. Light a candle to the right of the priest on the pedestal to open up first ghost area.

In the catacombs below, there are four bunches of tulips. Light candles under each bunch, counting up. So first candle under the single tulip, second under the 2 tulips etc. Ghost appears. Chase it around to bring down its hp.

Priest will now unlock the graveyard for you, the fenced area just left of the church.

Inside the graveyard, go left. Enter the little building/crypt. It is dark. Use your candles to light the way. There are 5 spots where you can put candles, marked with arrows and circles. Crouch down and x over a candle you've put down to pick it up again. Once you've put down the 5 candles, catch the ghost.

At the very left of the graveyard is a cat. It runs away if you light a candle next to it. Chase it to the right until it runs past MacMurlach's grave, then catch the ghost.

The third grave from the right on the first graveyard screen doesn't have a name, just instructions. Follow them, lighting a candle to the left of the grave, to the right of the grave, then jump on top of the grave. You should fall down into a little underground area. There is another grave, saying "All onto me" and some bugs running around.

The bugs turn around when they get to a candle. By placing candles on both sides of the grave, progressively closer, you can get all the bugs to be on top of the grave at the same time, releasing the ghost to catch.

At the lamp outside the house of the gravekeeper, a moth is flying around. It will fly to nearby candles. By placing and picking up candles, you can lure it to the MacJohnson grave, releasing a ghost to catch. Don't put the candles too far apart, or it flies back to the houselamp.

The house actually does have a door, it's just hidden, slightly on the left side. Inside, the house is dark. If you light a candle and move, a giant hand catches you. However, it doesn't if you don't move. Use this to your advantage to place candles to see the platforms, then pick them up and jump. Go to the top and light a candle on the pedestal. Then catch the ghost.

Place three candles at the fish statue then kneel down. It will rise up to reveal a chamber. Place candles in the chamber according to the moon plaque story. Mountain -> Snowflake -> Cactus -> Tree -> Moon. Catch Ghost.

Notice the patterns in the windows inside the barn? You need to make sure all the patterns exist by putting candles on the platforms.

Protip, you can jump on the top background pillars in the hilly area. You need to jump on a short one to get all the way to the left. Go left to the Lumberjack's house, jump on his lumber pile then on his roof, then jump right on the pillars to get to the top of the tower where you can enter.

You need to use candles to get rid of all the fog inside the tower, then catch the ghost.

Go left after jumping on the Lumberjack's roof, and enter the cave. Inside the cave, wait and do not light any candles. A monster should come closer to you. Light a candle when it is right next to you then catch the ghost.

Banshee:
Go all the to the right where you began and light the soul Lantern. Catch the Banshee! (It's pretty simple)

Thanks man, I had never seen that cat by myself. And the moth: Damn, that is obvious! I don't know why I didn't even think of that!

I have 6 souls, cleared the church, the building in the graveyard, the gravestone with lights placed at both sides, the fish, the barn and the (extremely difficult) house with no door in it.

I have gone forward and backward inside and outside the churchyard, but I really cant find anything else. Except for that strange 'wall' (that does not act like a wall, since you can pass through it) and the peculiar pole-like things the far left, but there seem to be nothing to do with those...?

It's not a wall, it's a tower! There's another 2 souls in the graveyard, talk to the people in the house left of the Fish Statue for clues. You need to jump on one of the pole things to get all the way to the left to the Lumberjack's house, and access the cave and tower from there. Lumberjack also has clues about another ghost.

Incredible game; had a lot of fun with it.

I can't complete the level in the doorless house! The gaps are too big! Make them shorter!

Wake me up when walkthroughs of this game become a thing.

The level inside the barn is too f***ing hard, especially if I leave my door open for everyone else using adjacent rooms. And they're ALWAYS busy.

this game was awesome, though the "fall onto me" grave killed me a lil. crazy fun!!

How do I feel around the house that is "without a door"?

An absolutely lovely game. I found a lot of joy in playing it.

I really like the premise of hunting the souls, ending in the little boss battles. It's like Metroid II. :D

The level in the graveyard is SUPER difficult. I can't even weaken the soul long enough to capture it with all that awful parkour.

that was great , nice puzzles !

How do you use the candles in this game?

You crouch and press X or L,